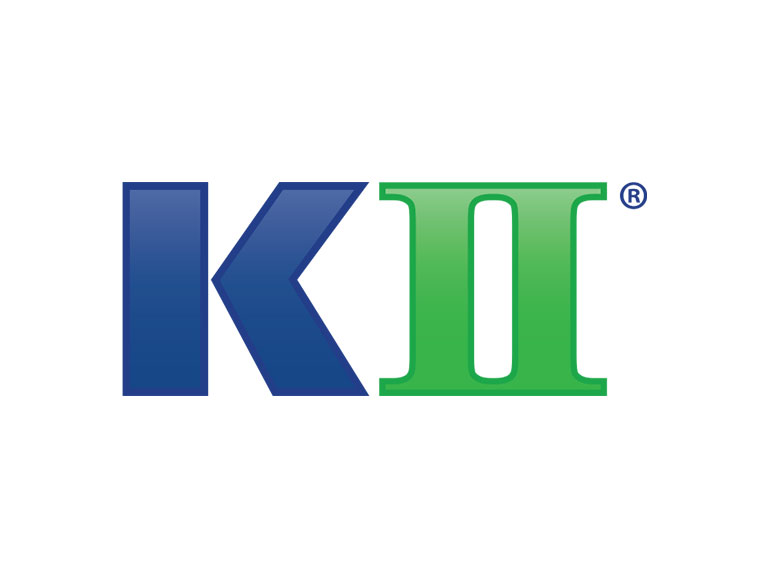 A review of the last 20 years studying the greatest influencers in the world; Gandhi, Christ, Martin Luther King, Mother Teresa, Suu Kyi, Benazir, Bhutto, Margaret Thatcher, Rosa Parks, John Maxwell, M. Scot Peck, Jack Welch and many others – shows it wasn’t just what these people did that made them influential. It wasn’t because they had money, position or authority. They were influential because of who they were or are, and the traits they possess.

You’ll Learn How To Expand Your Ability to Influence

The KII® will help identify strong and challenging areas and how this impacts your potential to be influential.

You’ll learn which of influence traits are working hard for you and which ones need attention.

You’ll Learn How To Enhance The Quality of Your Leadership

The Keller Influence Indicator ® (KII™) is the first and only scientifically-based assessment that measures influence. There are also practical growth steps for each trait tailored to your unique assessment. 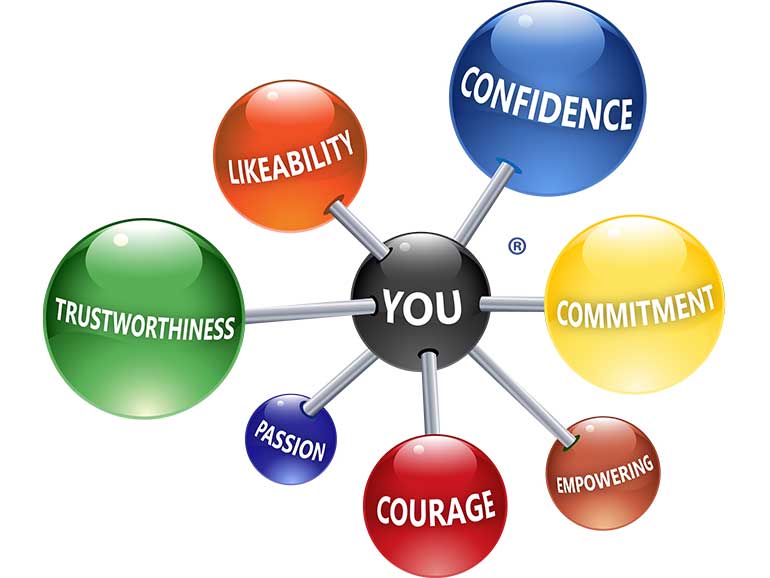 With (2) distinct reports so you can gain insight into the predictive tool that the Influential Leadership Assessment offers:

Delivers a unique, custom report that:

Offers a brief summary of the KII™ Report and provides additional new information to the individual based on their responses on the Keller Influence Indicator® assessment. It correlates each of the Seven Influence Traits™ with these 5 Organizational Competencies including:

The FIRST Requirement for Being An Influential Person is Knowing Yourself

How to get started? 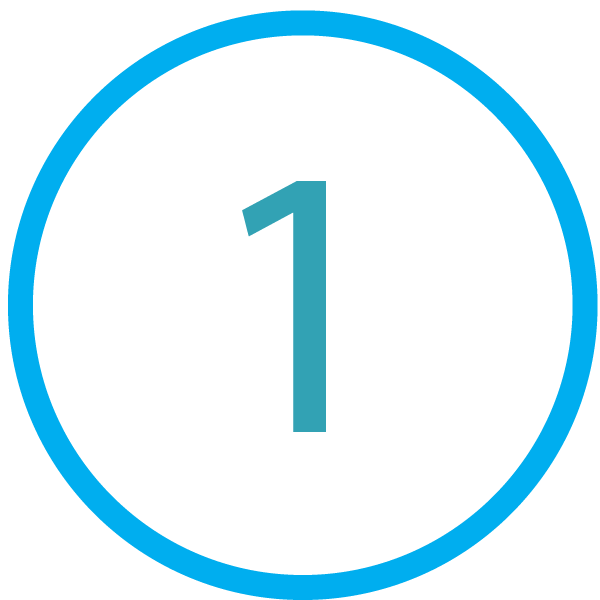 When you receive the link to take the Assessment it will provide instructions on how to complete the KII® Assessment. 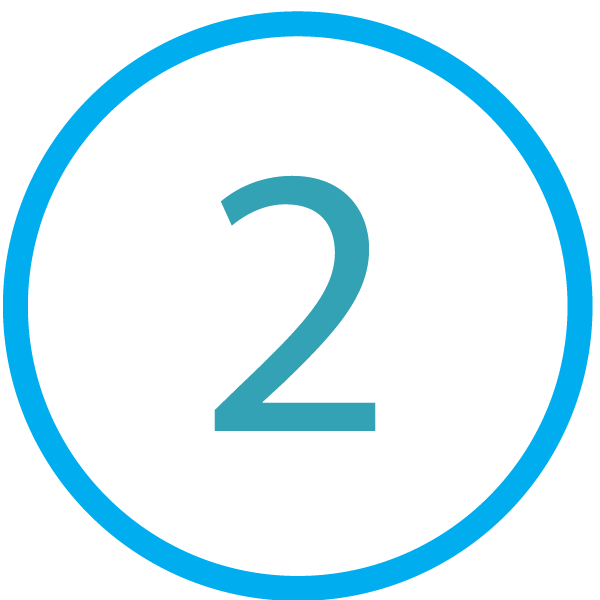 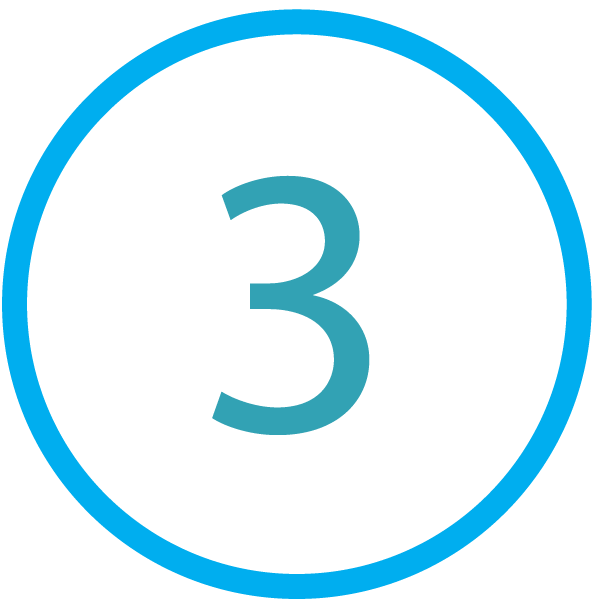 You will be offered the opportunity to purchase the KII® Client Workbook since this will give you further insight into the KII® Assessment. 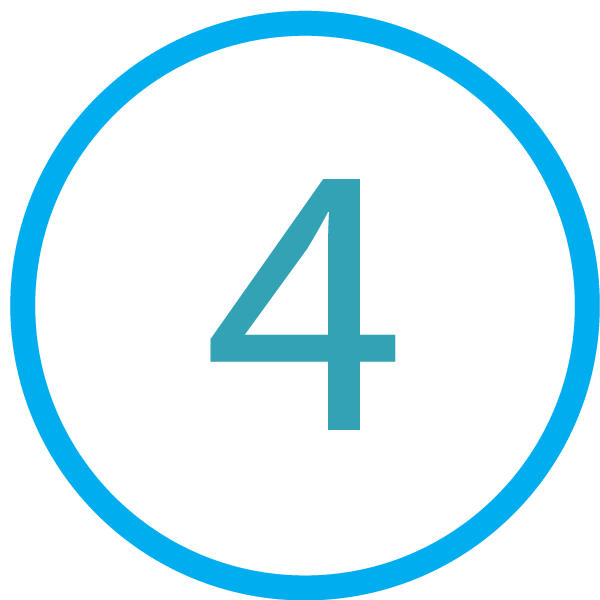 You can then request Influence Coaching from the Executive Coach to help you become influential.

Ready to learn more about yourself? 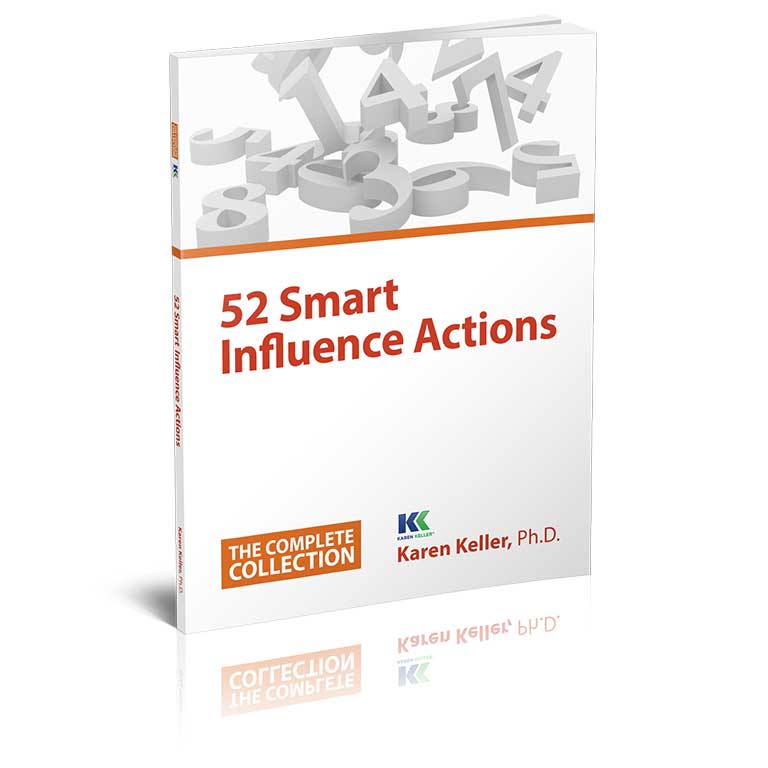 The 52 Smart Influence Actions Collection is a digest of influence actions that you can take immediately to improve your presence, increase your desired results, and get the respect of others around you. Building influence is definitely a process but it doesn’t have to be a struggle. 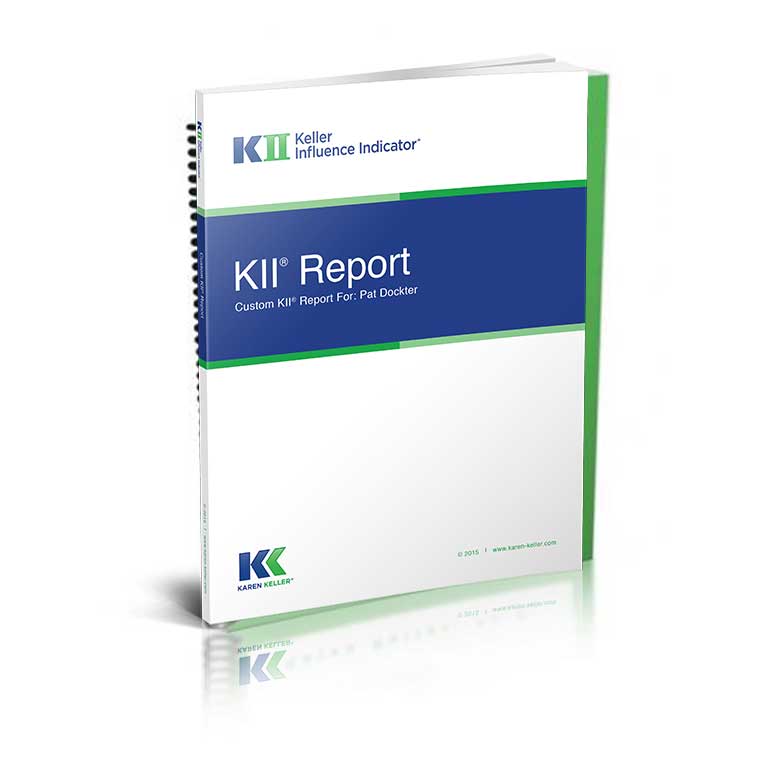 The Keller Influence Indicator® is the only scientifically validated assessment of influence potential. You will receive a customized 40+ page KII® Report detailing scores, strengths, blindspots, application, and narratives on how to use your influence and what to do next. 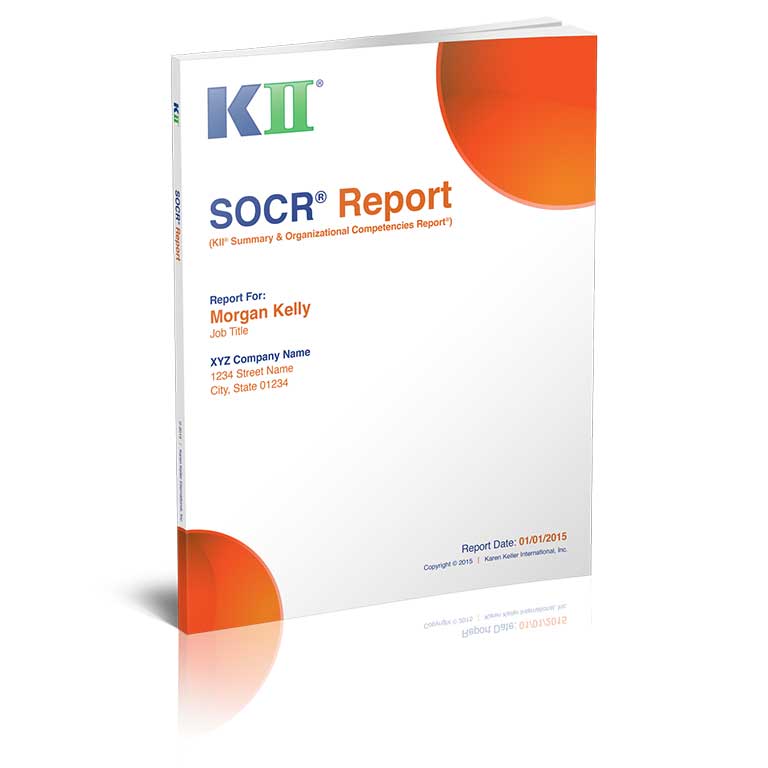 The SOCR™ Report is intended to help you understand your KII® results and how they impact your influence, competencies, and value to an organization. This overview will challenge you to change and apply the discoveries you make. 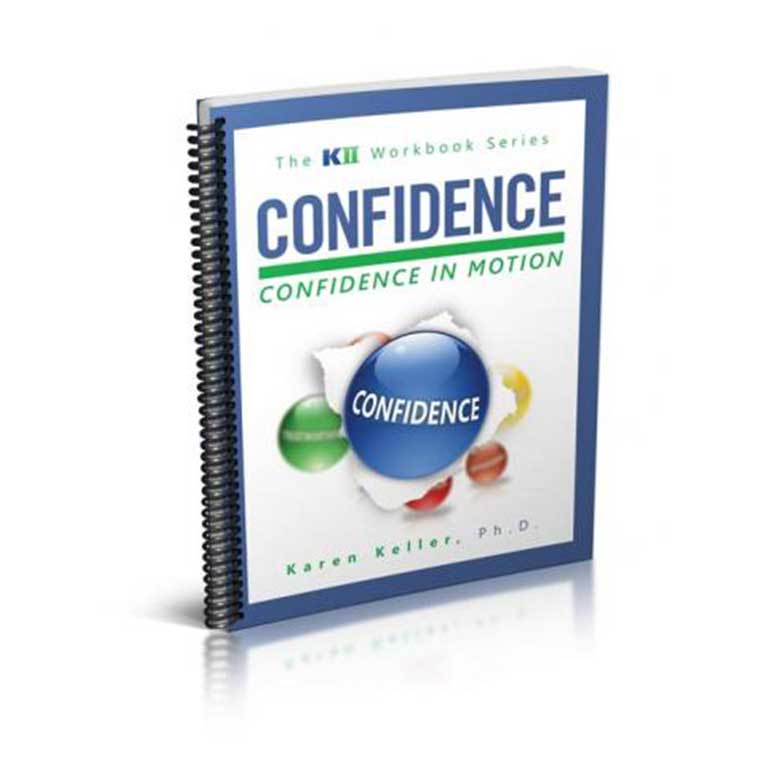 What is something you would want to accomplish if you knew you could not fail? What would your life look like – your relationships, your career, your business – if you were guaranteed success? The strength of your self-confidence determines the size of the goals you set, the energy and fortitude you apply on achieving them, and the amount of perseverance you apply to overcoming every barrier in your way. Confidence is a measure of the trust or faith you have in yourself and your abilities. 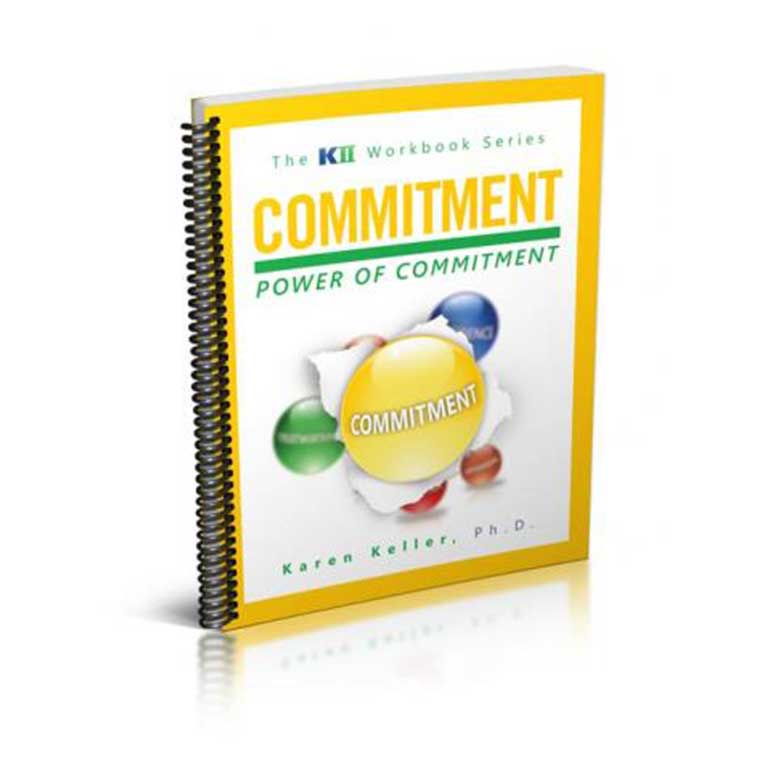 Have you ever looked back and thought if you would have only made a stronger commitment? Do you remember a time when you made a commitment and got seriously hurt in the process? Imagine what your life would look like without ANY commitments? Or think about how much you could accomplish if you made commitments that you valued and easily kept. The Power of Commitment KII™ Workbook teaches you the underlying reasons for making healthy commitments, how you can stay faithful to them, and the benefits to your life. 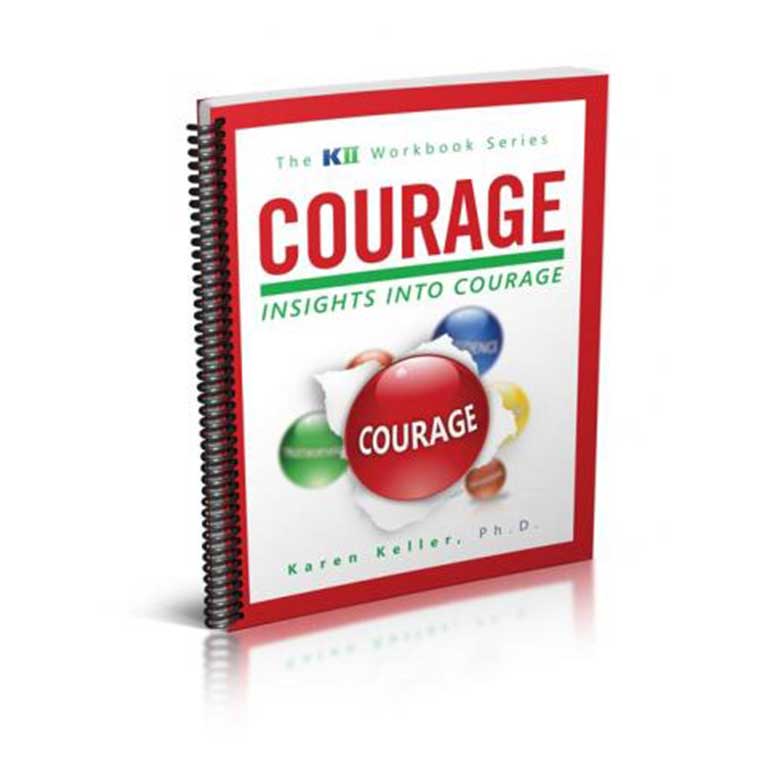 No matter what your situation in life, every decision, every action, and every commitment requires courage. It takes courage to be different, to be unpopular, and to transform minds. People are ready to choose the life they want to live. They want to be all they can be in their personal and business relationships. Once you start to explore the fundamentals and competencies of courage your courage will expand as your grow. Courage allows you to focus on best results. 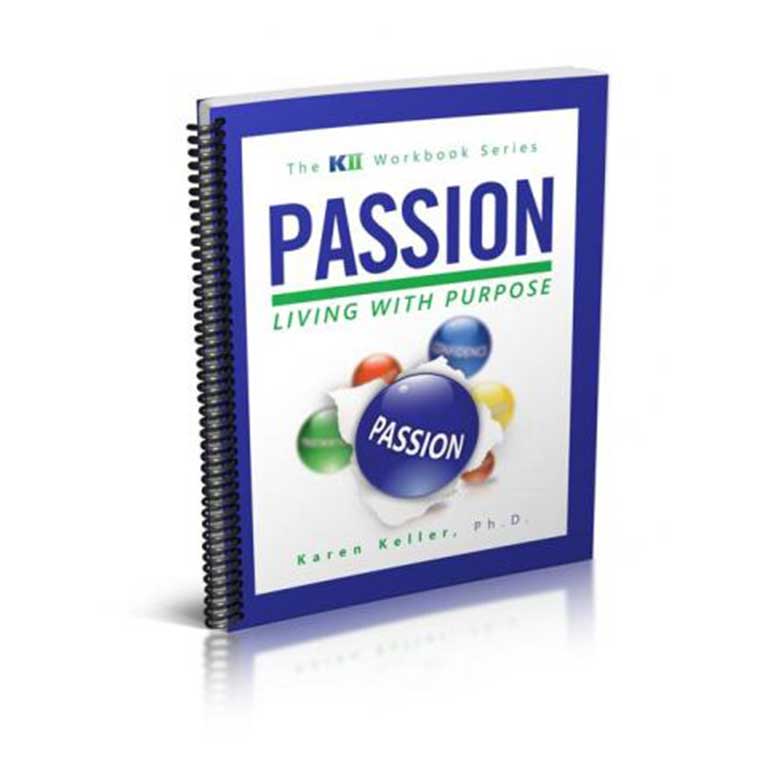 When was the last time you pursued your passion or opted for being practical? What is it that drives you? What burning desire keeps you warm, lighting your efforts and motivation? Passion is a beautiful sentiment but it’s also powerful and fundamental to your motivation and momentum. Passion is something you can build towards every day. Passion gives you the tools to inspire others and create real, lasting change. The desire to aim high to a larger goal builds your overall creativity and creation. 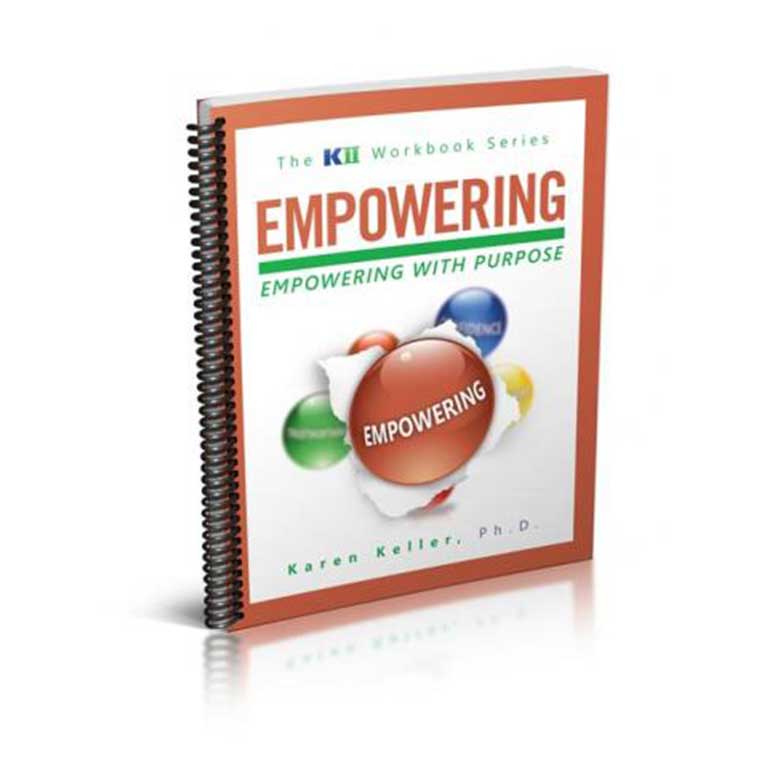 How influential would you be if you made it a practice of sharing information, rewards, and power with others? Imagine how your life could be different if you give people the resources, authority, opportunity or the change to contribute. Empowering others is a process that encourages people to gain control over their lives. It fosters power that they can use in all aspects of their lives. When you empower people you are helping them succeed and achieve on multiple levels. 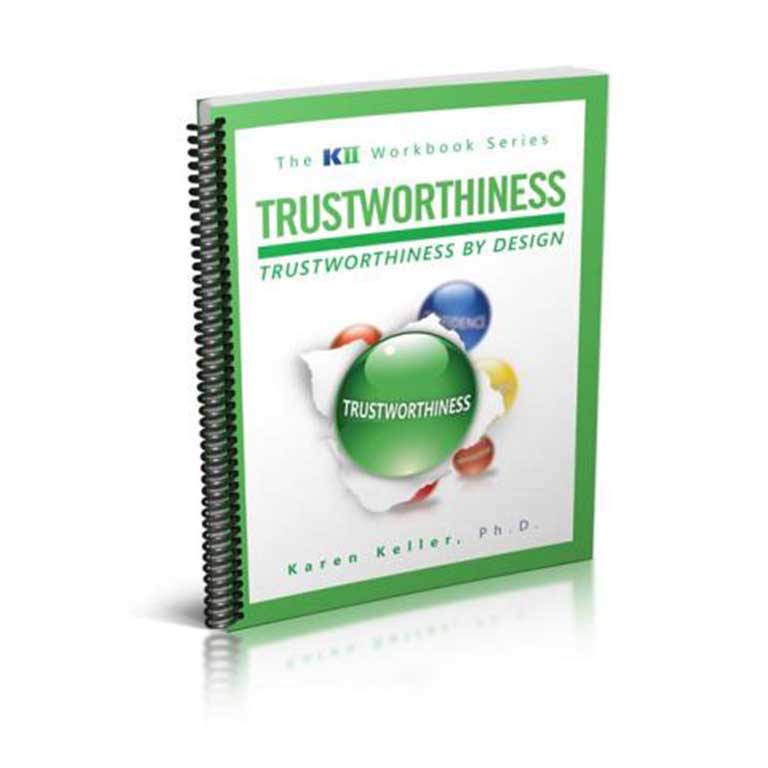 Living the virtue of trustworthiness can enhance your life beyond belief. Being trustworthy is an indispensable aspect of good character. How would people respond to you if you had the highest level of trustworthiness? The Trustworthiness KII™ Workbook is 150 pages of powerful exercises, guides, self-quizzes, and questions to challenge and move you out of your comfort zone and into your highest standard of trustworthiness. It will help you increase your loyalty to others, keeping your promises, and being honest by being yourself. 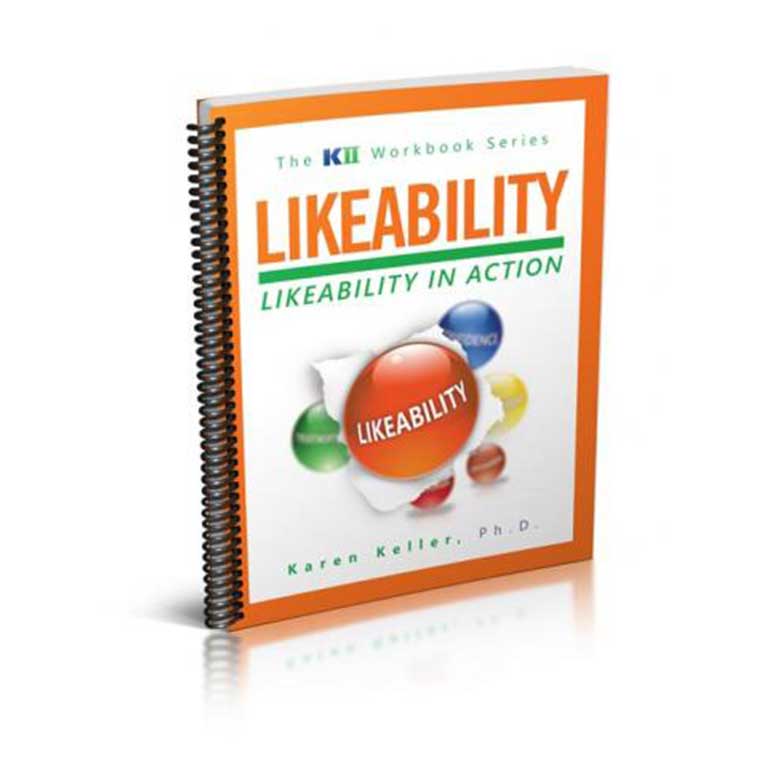 Did you know the value of being approachable is priceless? Yes, it’s the first thing that happens between two people before any conversation or chance to influence one another. The Likeability KII™ Workbook will show you how to take the necessary steps in shifting your mind and approach to becoming a likeable person. You will have access to 150 pages of material that shows you which questions are the smart ones, how to utilize your resources, and how to remain likeable even in conflict. 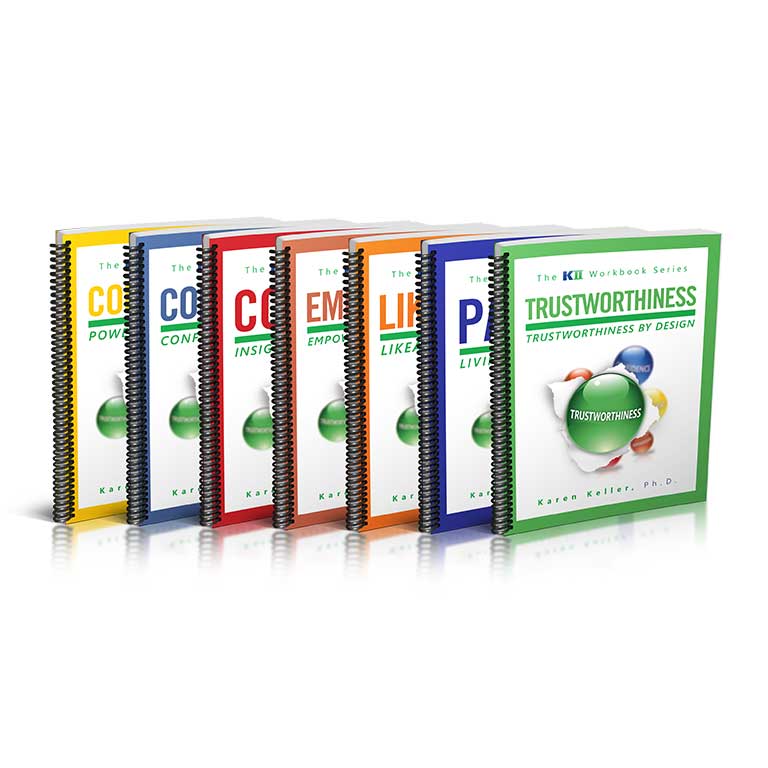 Experience the total KII® Workbook Series Box Set as you enter into each of the 7 Influence Traits workbooks one by one allowing you to thoroughly immerse yourself in increasing and strengthening each of your influence traits. Each KII® Workbook consists of 42 Lesson plans of three components; Fundamentals, Competencies, and Mastery.

I’m ready to Make An Influential Shift with LNC Coaching.

YES, I would like to receive a complimentary Pay-It-Forward Box to plant a seed and influence someone special in my life.
SIGN UP!